Health benefits of noni juice include prevention of cancer, protection and healthy functioning of liver maintenance of cardiovascular health, relaxed muscles, relief from memory problems and conditions like gout and diabetes. The immense antioxidant potential of noni juice exerts antipsychotic, antifungal, antibacterial and anti-inflammatory effects which are valuable in treating conditions like arthritis and disorders related to central nervous system.

Since thousands of years, the natural healing power of noni juice has been esteemed for its ability to keep the skin healthy, boost energy levels and prevent general body weakness, accelerates wound healing and toughens the immune defense system of the body.

Noni juice is derived from the fruit of a small evergreen plant called noni, also known as Indian mulberry normally found in global subtropics and tropics. Botanical name Morinda citrifolia, noni belongs to the Rubiaceae family and is privileged as the ‘queen’ of the Morinda genus owing to its conspicuous attributes, versatile nature and distinctive capability of spreading itself usually on the seashores without requiring much human intervention. It is often one of the earliest species which grow on the freshly deposited lava flows typically in Hawaiian regions. 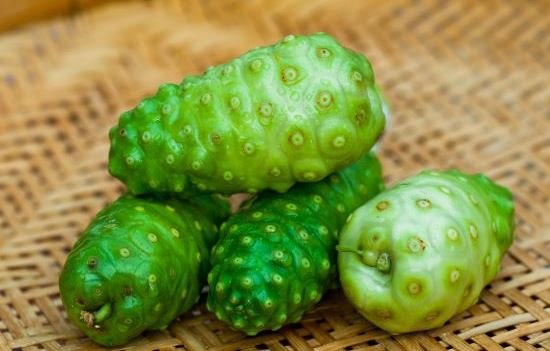 The historic beginning and geographic dissemination of noni juice in the pacific islands traces back to thousands of years. Until the later part of twentieth century, noni plant was just used for dyeing clothes before its intriguing therapeutic value took its position at the forefront of alternative medication. Since then it has been admired as a focus of the Polynesian conventional medicine and is deliberated as a sacred healer among the Hawaiians for every plausible imbalance. In the recent years, noni juice has been a part of discussions and speculations globally attributing to its unique healing

characteristics however, its true therapeutic potential is yet to be discovered.

Noni tree is more like a shrub or small tree with its height ranging from 3-10 m. It has rounded branches, dark shiny leaves, reddish-brown seeds, small groupings of edible white flowers which in due course progress into a few-inches long, potato or egg-shaped greenish white fruit carved with many round grooves.

Noni juice offers an impressive gamut of healthful vitamins, minerals and other phytonutrients. Vitamin content of noni juice include vitamin B1 (thiamine), vitamin B2 (riboflavin), vitamin B3(niacin), Vitamin B5 (pantothenic acid ), vitamin B6, vitamin B12, vitamin C (ascorbic acid), folate, vitamin E (alpha-tocopherol) and beta-carotene. Mineral content present in noni juice include calcium, potassium, magnesium, iron and phosphorus. Along with this, the abundance of natural chemical constituents and an inspiring range of antioxidants such as quercetin, vanillin, pinoresinol, proxeronine, kaempferol, isoscopoletin, bisdemethylpinoresinol and scopoletin accentuate the entire nutritional value of the noni juice.

A long-established cure, noni is a plant with multiple benefits ranging from traditional usage of its wood for making tools to its juice being used as a first aid or for treating critical illnesses. Healing effects of noni juice for various medical conditions have been discussed as under:

Antioxidant potential: Noni juice has a tremendous anti-oxidative potential which seeks out for the oxygen free radicals and neutralize their negative effects. A research conducted on the patients with heavy smoking habits making them vulnerable to many diseases have advocated the protective effect of noni juice in improving the radical scavenging potential of their bodies and providing relief from the diseases caused by oxidative stress.

Cancer: The anti-cancer qualities of noni juice have been traditionally trusted and advocated by the modern science. Various clinical and laboratory research have suggested the chemo-preventive properties of noni juice in the prevention of various cancers such as lung cancer, liver cancer and renal cancer owing to the abundance of healing antioxidants. As supported by another scientific finding, effectiveness of noni juice in reducing the risk of cancer attributes to its ability to block the carcinogen-DNA binding and prevent adduct formation. Furthermore evidences have revealed the efficacy of noni juice in retarding the tumor growth in mammary glands by significantly decreasing the weight and volume of the tumors in the subjects. 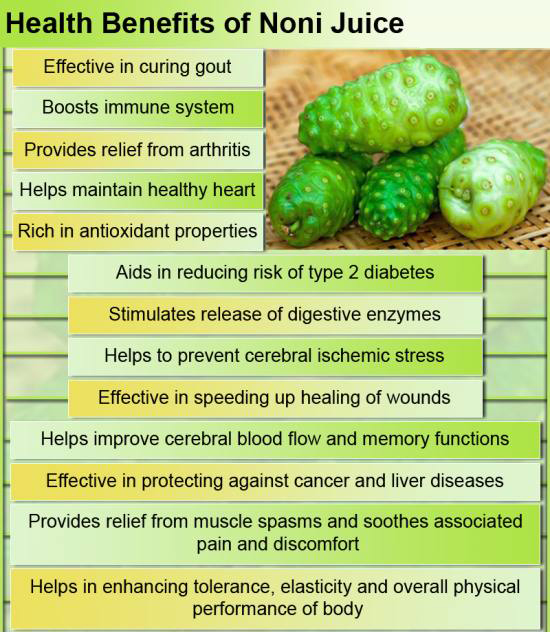 Gout: Morinda Citrifolia or noni juice extends its therapeutic effects in curing gout. The effectiveness of noni juice in curing such diseases attributes to its inhibitory action on the xanthine oxidase enzymes which are implicated in gout and its associated problems. Scientific research has also supported this curative effect of noni juice which has been in practice from over thousands of years.

Antispasmodic effect on muscles: Consumption of noni juice may help create a relaxing effect on the muscles. Research studies have revealed the antispasmodic properties of noni juice possibly attributing to the blockade of voltage-dependent calcium channels and secretion of intracellular calcium content in the body. It helps in suppressing the muscles spasms and soothes the associated pain and discomfort.

This vasodilating effect of noni juice helps regulate the blood pressure and assists in maintaining a healthy heart. Furthermore, research has demonstrated the positive effects of noni juice on the lipid profiles which are again a major aspect in the maintenance of cardiac health. It may benefit in reducing the LDL (bad) cholesterol levels, total cholesterol content, homocysteine and improves HDL (good) cholesterol levels in the body.

General body fatigue: Noni juice is a time-honored medicine and was traditionally used by Polynesians to combat general body weakness and advancing quality of life and energy levels. Various clinical researches and studies have shown the ergogenic qualities of noni juice which helps in enhancing the tolerance, elasticity and overall physical performance of the body.

Liver protection: Noni fruit is also known for its effectiveness in protecting against the liver diseases. As supported by research study, noni juice exercises hepato-protective effects on the liver which assists in protecting the organ from exposures to chronic exogenous chemicals and defends against major illnesses like liver damage.

Anti-psychotic qualities: Noni juice has been historically utilized for treating a range of ailments including the disorders related to central nervous system. Studies investigating the anti-psychotic effects of noni juice have shown significant improvement in the subjects especially with respect to their behavioral issues and have demonstrated its huge potential to be used in curing psychiatric disorders. Additionally, noni juice has also been suggested to have therapeutic effect on the brain damage attributing to the curing power of natural chemical components. It may assist in preventing cerebral ischemic stress without affecting the efficacy of good enzymes and antioxidants functioning in the body.

Arthritis: Healing powers of noni juice brings relief in inflammatory conditions such as arthritis. Scientific evaluation has provided qualitative evidence regarding the analgesic traits of noni juice which helps in alleviating pain and sensitivity thereby, reducing the joint destruction implicated in the painful arthritis. The study also suggested that the remedial efficacy of noni juice is at par with some of the well-known commercially available analgesic drugs.

Diabetes: Diabetic individuals may also benefit from the healing power of Morinda citrifolia or noni extracts. This has been proven by a research study which has shown the effectiveness of noni juice as a remedial herb for reducing the risk of type 2 diabetes. Scientific evidence has testified that consumption of noni juice helps in reducing the level of glycosylated hemoglobin, serum triglycerides and low-density lipoprotein cholesterol in the body. In addition to this, it works towards enhancing insulin sensitivity and stimulates the uptake of glucose.

Healthy skin: Noni juice may be regarded as a natural aid in beauty and skin care. Studies suggest that noni juice is rich in protective chemical constituents, anthraquinones which exert collagen stimulating effects and prevents the formation of wrinkles on the skin surface. Anti-bacterial, anti-inflammatory properties of noni juice work at the cellular levels and are useful in curing various skin disorders including acne, burns, allergic skin reactions and hives holistically. The presence of essential fatty acids and high concentration of biochemical component proxeronine, which is a precursor to the alkaloid xeronine in noni juice supports efficient functioning of cell membranes, tends to normalize abnormal cells and help restores young and healthy skin.

Gastric emptying: Noni juice may prove useful through its impact on the gastric emptying process in which the food exits the stomach and enters the duodenum. The results from a study conducted on noni juice revealed that phytonutrients present in noni juice delays the gastric emptying which slows down the digestion resulting in slow discharge of sugars in the bloodstream. The study also suggests that noni juice stimulates the release of digestive enzymes, cholecystokinin without altering the volume of urine, feces and intestinal transit.

Wound healing: The juice of Morinda citrifolia or noni is effectual in speeding up healing of wounds. Research study evaluating the wound curing properties of noni juice has revealed positive results with respect to the increase in the weight of the granulation tissues, functioning of collagen and hydroxyproline and protein content. As mentioned above, noni juice helps in reducing the blood sugar levels in the body which can also be correlated to the accelerated wound healing process.

Stronger immune defense: Strengthened immune system is yet another benefit of noni juice which accentuates its credibility. Since the earlier times noni juice has been valued for its effectiveness in fighting infections and other ailments attributing to the presence of valuable polysaccharides. These helpful components stimulate the activity of white blood cells which play an important role in exerting such protective effect. Scopoletin present in noni juice possess anti-bacterial, antimutagenic, anti-inflammatory, antifungal and anti-histamine properties which significantly contribute in sustaining the immune defense mechanism of the body.

Noni: word of caution
Research evaluating the safety and efficacy of noni juice has provided positive results regarding its consumption on the dose dependent basis. However, special cases and individual concerns require caution to be exercised. Few of the concerns have been mentioned as under:

High potassium content: Noni juice contains a good concentration of potassium which may interfere with various drugs used for curing high blood pressure such as potassium-sparing diuretics and angiotensin receptor blockers. These two can collectively result in very high levels of potassium in the body giving rise to symptoms like nausea and cardiac arrhythmia.
Kidney problems: Basis the above mentioned reason, noni juice should not be taken by the individuals already combating with kidney problems as it may tend to aggravate the existing condition.

Although several studies have advocated regarding the safety of noni juice, it is strongly recommended to consult a medical professional before considering it for remedial measures especially during special conditions like pregnancy and lactation. Other than that, natural caution before trying something for the first time always keep you better particularly when you are not aware of the allergic reactions.

Noni: Summary
Noni juice has been prized for its medicinal nature for more than 2000 years in Polynesia, china and India and is a major part of emerging healthcare trend. Numerous people across the globe including the health experts have testified the astounding and life-changing health related benefits of noni juice. While the fruit and its juice are quite popular for their therapeutic qualities, other parts of the noni plant such as bark, leaves and roots too have a spanning history of traditional usage in Polynesia. 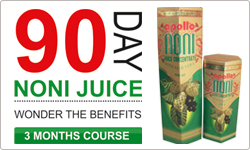 The bark and roots of the noni plant have been traditionally used for dyeing purposes attributing to the presence of yellow chemicals known as anthraquinones.

Apart from the above listed advantages, proxeronine present in noni juice is an effective anti-inflammatory enzymes which also provides relief in symptoms of menstrual pain and endometriosis in women. Noni juice helps elevate the mood by stimulating the production of serotonin and prevents the condition of anxiety and depression. It works as an amplifier for the entire endocrine system which is positive for the functioning of thymus gland, pineal gland, adrenal glands and sex organs for both males and females. All these health gains and medicinal features make noni juice a potent remedy in multiple indications and promote overall health.

close
close
Start typing to see products you are looking for.